Here's the complete text of a press release on my forthcoming special show:

Monticello, N.Y. (March 14, 2008) – Bill Boggs, a staple in New York City media for years, has something confidential to tell you on April 5. Actually, he’s got a lot of confidential things to tell you.

"Bill Boggs Talk Show Confidential" (developed at the fabled John Houseman Theater in the spring of 2003) is a humorous and enlightening one-man show featuring stories, rare videos and songs about the world of television Boggs has inhabited for the past 30 years.
A special presentation of Catch A Rising Star, “Bill Boggs Talk Show Confidential” comes to the Catch stage at Monticello Gaming and Raceway on Saturday April 5. This unique show, which is currently playing at the Triad Theater on West 72nd Street in New York City, is an experience like no other. Show time at Monticello is 8 p.m.

Boggs is a four-time Emmy Award winning television talk show host, a popular after-dinner speaker and master of ceremonies, an accomplished stage performer, a noted TV show producer and a frequently published journalist. His wide-ranging and diverse career has included hosting the seminal New York talk show, "MIDDAY LIVE WITH BILL BOGGS," for Metromedia and FOX for 12 years, and creating and hosting "BILL BOGGS CORNER TABLE" on Food Network since the network's debut in the mid-1990s.

In addition, Boggs has anchored the news for NBC-TV; and hosted "Comedy Tonight," a syndicated comedy show, for Fox Television; a game show, "All Star Anything Goes" for CBS-TV; and a live Saturday morning talk show," Saturday Morning Live," for Metromedia.
Boggs was the host and creator of the PBS television show, Home Cooked Classics. He's also currently serving as the energetic on stage force behind Simon Super Chefs Live, a 24-city culinary food and wine show presented around the country in Simon Malls. He pioneered the first-ever national restaurant review show, TV Diners on Food Network and he’s interviewed notable guests on CNBC's Let's Talk Stock and also on Historic Traveler and Freeze Frame (on the Travel Channel).

Boggs, who has also won acclaim on stage for his singing and story telling in the Off Broadway hit, "Our Sinatra," created and starred in "A Fine Romance," at New York's four-star "Restaurant Daniel.”

Boggs is indeed a noted food, lifestyle and travel authority, having interviewed and worked with many of the world's top restaurateurs and chefs, and has also appeared as himself in a dozen dramatic movie and TV show roles. In addition, he has authored a novel, "At First Sight," written for The New York Times and other prestigious national and international periodicals and served as the executive producer for both the groundbreaking "Morton Downey, Jr. Show" and "Court TV.”

Boggs has anchored live news shows for MSNBC and hosted "Freeze Frame" and "Historical Traveler" for the Travel Channel. He is the host of Showtime's "Boxing Report Update," and was seen in the Fall of 2002 in the new syndicated show, "House Beat.”

In 2007, HarperCollins published Boggs’ widely-praised book, Got What It Takes?: Successful People Reveal How They Made It To The Top. The book is based on success secrets uncovered in his interviews with leaders in diverse fields—among those included in the book are Sir Richard Branson, Renee Zelwegger, Diane von Furstenberg, Clive Davis, Donald Trump, Matt Lauer, Joe Torre and many others. He is also a featured columnist for The Good Life Magazine, Crush Magazine and Black Tie International Magazine and has written several pieces for The New York Times.

Boggs brings all of his lifetime of work to the stage in “Bill Boggs Talk Show Confidential.” Confidentially we can tell you that it will be an awesome night that won’t be forgotten.

For a full listing of the Catch schedule, check out the Catch website, http://www.catcharisingstar.com/, or go to http://www.monticellogamingandraceway.com/.

Tickets for the Bill Boggs show are $15 each. For ticket information about this and other shows at Catch A Rising Star Comedy Club at Monticello Gaming & Raceway, please call 845-794-4100, ext. 494, or toll-free 1-866-777-GAME, ext. 494, or visit http://www.catcharisingstar.com/ or http://www.monticellogamingandraceway.com/. 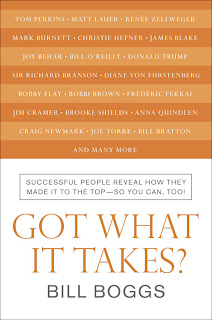 I'm excited to announce that HarperCollins is releasing the paperback edition of... (drum roll)

GOT WHAT IT TAKES? Successful People Reveal How They Made It To The Top—So You Can, Too!

Eagle-eyed fans of this blog will have noticed that the new edition features a slight extension to the subtitle ("So You Can, Too!"). And, ultimately, that's what the book is all about—helping you achieve success.

I also pleased to report that advance orders for the book have already begun, and you can reserve your copy now on Amazon by CLICKING HERE. 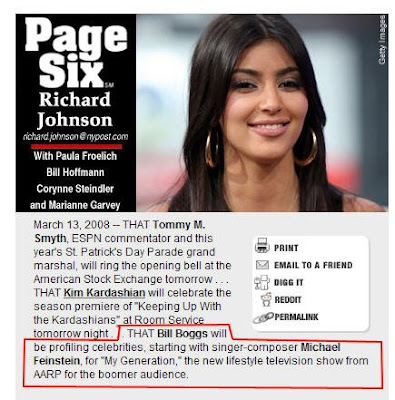 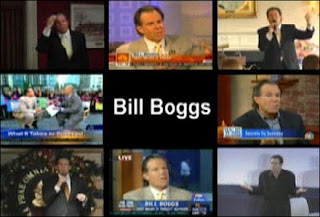 Check out my new video link on the front page at www.billboggs.com.
Or CLICK HERE to go directly to the video page.
Posted by Bill Boggs at 4:16 PM No comments:

That is, I'm in The New York Post today in Cindy Adams' column:

"TV's Bill Boggs, whose "Got What It Takes?: Successful People Reveal How They Made It to the Top" is out in paperback next month, was careening through Midtown traffic holding an empty Burberry leash. Chasing after his dog, who'd somehow slipped his collar. He finally grabbed his hound safely, and Burberry even replaced Rover's fashionable plaid set. Bill's next might be "Successful People Reveal How They Made It Through Panic."

Once again, I'll be hosting a visiting chef dinner at the Yale Club Roof dining room. John Doherty, executive chef of the Wakdorf-Astoria will be in the spotlight. The menu will consist of courses he has prepared for the past four U.S. Presidents. (March 18th)

On June 12th I'm hosting a lunchtime interview series at the Friars Club of New York, with "Cousin" Bruce Morrow—the legendary radio DJ. It's sure to be fun.

Have a merry March!
Posted by Bill Boggs at 10:11 AM No comments: