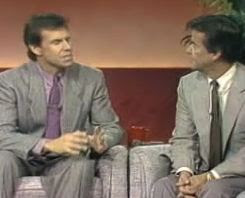 You can't grow up in Philadelphia (as I did) go into television and NOT know Dick Clark. Dick Clark was one of the most successful people ever to have worked in TV. First as an announcer at the local ABC station. Then a big break and onto Bandstand then a local show in Philadelphia..and from that break, Dick made huge strides both as a performer and as a producer. Ultimately taking his company Dick Clark Productions public and making millions and millions of dollars. Dick Clark's talents? A brilliant communicator, wise business man and frugal producer, and to the many who've met him along the way, a lovely human being. In this interview I asked Dick to pick an era of rock music that would go into a time capsule and be shot into space—one year that he'd pin it all on...see what he says. I've been grateful to Dick over the years for his many appearances on my shows and we've worked together as well. He is in fine fresh form in 1986—one of the hardest working men in show business, and yes I know, I also interviewed James Brown.
CLICK HERE to view the interview with Dick Clark.
Posted by Bill Boggs at 2:29 PM No comments: Links to this post 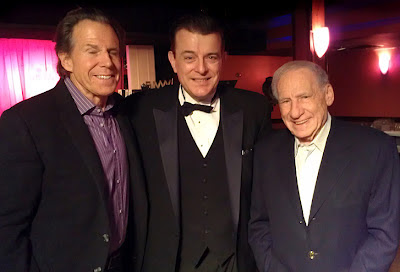 Mel Brooks and jazz king Vince Giorando
Mel Brooks was in a star-studded audience of jazz fans, including Leonard Maltlin and singer Marilyn Maye at Club Cache in NYC for Vince Giorando and the Nighthawks Monday night show. Vince and the big band perform Mondays and Tuesdays and play jazz arrangements from 1930's and 40's..maybe the last of it's kind in NYC and a true treat.
Posted by Bill Boggs at 7:35 PM No comments: Links to this post