I was interviewed by Frank Diamond for his Wednesday Gems column today in The (Philadelphia) Evening Bulletin. Just CLICK HERE to read the feature.

"Bill Boggs is too stinking successful. I mean it'd be easy to hate him if you were the jealous, petty type. Which I'm not. Really. Boggs was raised right here in Philadelphia, attended Lincoln High School and then the University of Pennsylvania. He came up through the same streets as you and I did, in other words. Except, he's gone much further. He's won four Emmy Awards, helped launch entire TV networks (Court TV), and has even sung in an off-Broadway hit called "Our Sinatra." In addition, he's a loyal and dedicated husband and father. He's like the guy from high school who becomes so successful that it lets the air out of every other "so what have you been up to" conversation at the reunion.Now, he's had the temerity to come out with a book called Got What It Takes? Successful People Reveal How They Made It To the Top. I jumped at the chance to interview Boggs when the opportunity presented itself. Lucky for him that I'm not the jealous, petty type."

You can also download a PDF version of the interview from my web site.

More soon!
Posted by Bill Boggs at 11:05 AM No comments: Links to this post 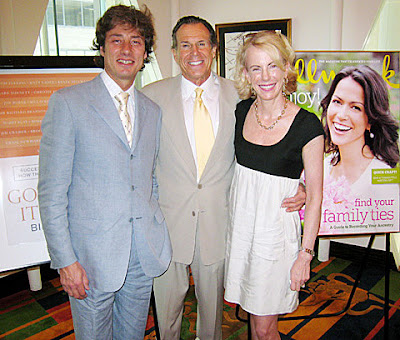 It was quite a luncheon at Le Cirque in NYC, where my wife Carol and I jointly celebrated two events... the publication of my book Got What It Takes? and the success of Carol's Hallmark Magazine.
It was a great day for all!
Posted by Bill Boggs at 8:00 AM 1 comment: Links to this post

To find out more about the show, please visit the web site:

www.talkshowconfidential.com
Posted by Bill Boggs at 7:31 AM No comments: Links to this post

Quick Update: you can catch my appearance on the NBC WEEKEND TODAY SHOW'S "At Work" segment, this Sunday, May 6th.
Posted by Bill Boggs at 10:24 AM 67 comments: Links to this post

STARR REPORT: "* Sunday: Bill Boggs guests on "Weekend Today" to discuss his new book, "Got What It Takes?," which includes interviews with A-listers - including Renee Zellweger, Brooke Shields, Mark Burnett and Norman Lear - discussing the secrets of their success. "
Posted by Bill Boggs at 10:19 AM 248 comments: Links to this post