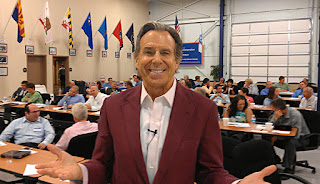 Posted by Bill Boggs at 7:55 AM No comments: Links to this post 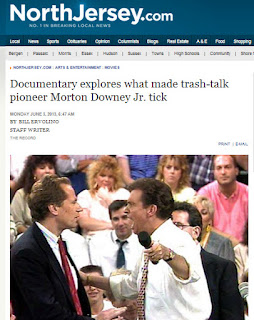 I'm featured in the new documentary "Évocateur,"  about legendary talk-show host Morton Downey Jr. Here's an excerpt from an article on the film in NorthJersey.com:

Talk show veteran Bill Boggs, who served as Downey's executive producer after Downey made the leap from local to national success, also appears in the documentary.

"I lived through it," Boggs told The Record in a recent interview, "and I think the filmmakers told the story well ... except for a couple of things. Some people say Mort was the antecedent to 'The Jerry Springer Show.' That's true and not true. The Springer show is a normal host with crazy guests. The Downey show was, for the most part, normal guests with a crazy host."

Boggs also agreed with the assessment of Buchanan, the Fox News pundit, who says in the film that Downey hooked into an audience that eventually moved on to Sean Hannity, Bill O'Reilly, and Glenn Beck - a hard-working, right-leaning group of blue-collar Americans who always seem to feel (no matter how many Hannitys, O'Reillys and Becks come along) that there is no one speaking for them.

"The thing about Mort," Boggs added, "is that he was a highly charismatic performer who came along at just the right time. He didn't just give opinion, he gave emotional opinion. He would take a viewpoint - and, like a debate champion, he could have taken either side - on issues like feminism, abortion, the military and so on and run with it. We'd bring up an issue, ask what his view was, and then structure the show that way. I don't think Mort ever argued a point that he didn't believe in, although he was capable of doing it."